his book was first published in Turkish under the title Bilinmeyen Osmanlı, co-authored by Prof. Dr. Said Öztürk, and 250,000 copies were printed. I answered 290 questions whereas Öztürk answered 13 in total. He collaborated regarding source details and references as well as tirelessly proofreading and editing the book. In addition, this book was later translated into Arabic; the first edition was published by Osmanlı Araştirmalari Vakfi (OSAV), Istanbul, and the second will be published by Dār al-Shouroq in Cairo.
The English version of this book has almost become a separate work from the aforementioned versions. Although the main part was translated into English by Ismail Ercan, the book needed a number of improvements and rewriting of some articles after referring to Western sources on the various subjects. Hence, I changed the title as well as the format of the book mainly for this reason. But I have indicated which articles were written by Prof. Öztürk.
As preparation for this book, the questions it deals with have been discussed in academic research ever since 1983, and, in addition, hundreds of conferences have been held throughout Anatolia. As a result, over 5000 questions have accumulated in our “question desk,” submitted in written form by both readers and listeners. For example, the issue of ḥarem comes first, with 503 questions. The issue of whether the Ottoman Sulṭāns, particularly Bayezid the Thunderbolt, drank alcohol ranked second, with 276 questions. These were followed by such questions as fratricide rights and freedoms in the Ottoman state, the issue of the Sulṭāns going on pilgrimage, if Sulṭān Waḥīduddin was a traitor, etc. Needless to say, we have been inspired by similar research done in this field.
This book will consist of four parts. In Part One we will deal with weighty questions on the political history of the Ottoman state and the replies to them. However, such questions are most frequently asked about each Sulṭān – even if they are related to law or economics. For instance, we will not ignore the issue of fratricide in his law when discussing Meḥmed the Conqueror and the charges of the genocide of the Kurds when it comes to Selim the Excellent. In Part Two we will deal with the questions on social life in the Ottoman state and the ḥarem. In Part Three we will look at those issues regarding the Ottoman legislative system and the organization of the state. In Part Four we will answer some questions about the economy and financial law of the Ottoman state. Unfortunately, we will not deal with all the questions we have received in all the aforesaid fields owing to insufficient space. Yet it is our view that if something cannot be achieved completely, we should not give up entirely and resign ourselves to what has been done.
There are 307 differents subjects in this book; some of them as below:
– War (jihād) in the Ottoman state and the legal principles of the policy of conquest in the Ottoman state
– The Devşirme (Conscription) System
– The allegations that the Ottoman state adhered to the Bektaşi and Aleviyye traditions during the years of its foundation until Sulṭān Selim the Excellent and that the Abdalan-ı Rum consisted of Bektaşi Babas and Alevi Dedes.
– On rumors that some Ottoman Sulṭāns were addicted to alcohol and even held illegitimate carousals at the Palace.
– The legality of fratricide in the Ottoman state and some claims by some historians regarding savagery and massacre for the sake of claiming the Sultanat.
– There are claims that Sulṭān Meḥmed the Conqueror was sympathetic toward Christianity and corresponded with the Pope.
– On the Ottoman State offering assistance to the Andalusian state that was destroyed in 1492.
– Ottoman Harem.
– Ottoman legal codes.
– Ottoman legal system and Islamic law.
– Which events sowed the seeds of hatred between Arabs and Turks, both of whom are Muslims?
– The reasons for the decline and fall of the Ottoman State.
– The capitulations as one reason for terminating the Ottoman State. 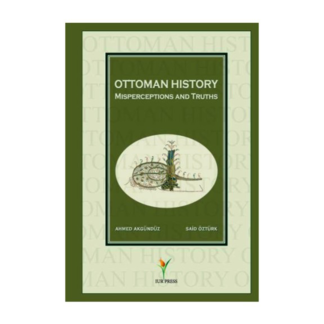 You're viewing: Ottoman History – Misperceptions and Truths €40.00
Add to cart