Ottoman Harem – The Male and Female Slavery in Islamic Law

Ottoman Harem – The Male and Female Slavery in Islamic Law

Thirty years ago, we have published The Ottoman Harem in Turkish and I have given a copy to Şükran Vahide (Mary Weld) to evaluate and to translate to English. She has translator the Risâle-i Nur Collection completely and is a native in English. When she had completed the translation, she told me “Dr. Akgunduz! I have enjoyed translating this book and I think that this book is very important in historical and religious sense.”

I have spent five years preparing this work Male and Female Slavery in Islam and the Ottoman Ḫarem. The product of those five years’ work has now been published in English. The subjects discussed in this book are as follows:

Part One; the distortions and misrepresentations of male and female slavery and the Ḫarem, together with some examples.

Part Two; male and female slavery in non-Muslim societies and in other religions.

Part Three; the institutions of male and female slavery in Islamic law.

Part Four; aspects of the practice of slavery, male and female, in the Ottoman state.

Part Five; an investigation of the question: what is the Ḫarem?

Part Six; a lady governess’s memoirs of the Ḫarem.

Part Seven; the replies to a number of important questions on these subjects.

My request of readers is that they read the sections they are interested in, and particularly that they study Parts One, Five, and Seven. I realize that Part Two is a slight digression, but I am of the opinion that the comparison is necessary in order to illuminate slavery in Islam and in the Ottoman state.

“Ahmed Cevdet Pasha says: “To own slaves in Islam is to be a slave.” What should be realized here is that Islam did not introduce slavery. So how was slavery practised in other societies and religions? How did other religions and peoples act towards slaves? Since “Everything is known through it opposites,” it is essential to know this in order to understand male and female slavery in Islamic law and the Ḫarem in Ottoman society.

The women in the Sultan’s Ḫarem lived under very strict discipline. They lived an enclosed life in their apartments, just as they paid great attention to these matters when they were out on trips or travelling. Since it was thus, does it conform to historical fact to show them to be immodest and overly free and easy, as in the films made recently? Does this reflect history as it was lived or is it make-belief? This should be pondered over fairly and reasonably.”

Şükran Vahide (Mary Weld): was born in 1948 in England’s Lancashire. She has graduated in 1980 from Durham University Faculty of Oriental Studies of the Turkish and Persian literature. After reading the English translation of the Risale-i Nur Collection, in 1981, she became a Muslim. Thanksgiving residing in Turkey in case of Vahidi, She has engaged in research in the Risale-i Nur. Many treatises, mainly English Words translated. She has married with a famous student of Bediuzzaman Mehmed Firinci. 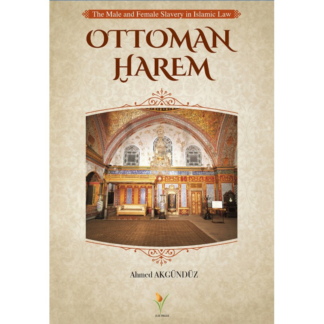 You're viewing: Ottoman Harem – The Male and Female Slavery in Islamic Law €25.00
Add to cart