In June 1989, while preparing the First Volume of the Ottoman Legal Codes (Osmanli Kanunnameleri) that was completed in 11 volumes, I observed that many concepts and terms are absent in the current historical and legal dictionaries. It was in this period that I set my intention to start a new project to address this issue, a completely new and comprehensive to constitute old Ottoman Historical and Legal Concepts and those expressions to cover voluminous Ottoman Kanunames (Legal Codes) was necessary. Two important memorabilia influenced the birth of this project:

Firstly my memory of Prof. Dr. Halil İnalcık who said: “Professor Akgündüz. Most Republican era historians often do not speak Arabic. They also usually do not focus on Islamic sciences as their own discipline, especially fiqh (Islamic Law). Yet these disciplines are the cornerstones for a sound interpretation of the Ottoman History. Thus it is essential to know Arabic, Persian and the Islamic Sciences. You are able to do this. This project would provide younger generation scientists a better start-line.

Second: The late Yilmaz Öztuna had called me after reading my book called ‘The Harem in the Ottoman State’. He had humbly complimented to read all my books if he had known to have more time in left in life. He had urged me to work on a dictionary a ’Qamus’.

I have preferred to name my Qamus ‘The Dictionary of Ottoman Historical and Legal Terms’, because most dictionaries were either authored without taking Islamic Sciences into account or the Islamic Law. Both disciplines are accepted as the two interior circles that complement each other. There may obviously be inadequacies or mistakes. Especially there might be shortcomings on the origins of words. I also acknowledge the inevitability of misreading or misunderstandings. For this reason, please do remind me of the mistakes for future reference. Reader suggestions and revisions will aid me to develop and grow the dictionary even more.

Islamic Sciences and Fiqh are necessary to understand and interpret Ottoman history and its legal terms. No Islamic law can be researched without the examination of the Ottoman practice. Research will unfortunately remain inadequate. The other way around, it would even be more disastrous to study Ottoman History without the sound knowledge of Arabic and Islamic Studies. Those who study this Qamus will agree with me on this point. Historians, for example, are often mistaken about Ottoman tax law.  Ebüssuud Efendi for example, clearly states in his Fatawa treatises published in Ottoman Kannunamaleri ‘Cift Resmi’ is calculated. The same is the case in the Encyclopedia of Islam and the ‘Sultan’s Decrees’ where mistakes are repeated and unfortunately referred to and wrongly misquoted in Western sources. Those who are curious can compare the same items with those of Qamus.

ARE THE EXISTING WORKS ON OTTOMAN HISTORY AND LEGAL CONCEPTS NOT SUFFICIENT?

To answer this question, we must state that:

A) DICTIONARIES OF HISTORICAL LITERATURE are NOT FULLY SUFFICIENT. The important works that can come to mind in this regard are, of course, the recent publication of Mithat Sertoğlu’s Ottoman History Literature, Mehmet Zeki Pakalın’s giant collection of Ottoman History Idioms and Terms Dictionary.

These are not enough in two respects: the first is in the sense of quantity. If you compare only the names under the heading ‘resm’, one will realize that the amount in my dictionary is twice as much. The same is true of most jargon concepts and expressions. The most important reason for this is that not all Ottoman laws have brought to surface. Second, it is in terms of quality and content. Because there is much confusion on concepts such as çift resmi, bennâk resmi and the misinterpretations in some materials are continuing in most cases. An important reason is the representation of official historical understanding led by Ömer Lütfü Barkan, Fuat Köprülü and others. Moreover, if the scientific errors in the literature which have been recently copyrighted are taken into consideration, it is indeed necessary to re-examine all the Ottoman historical records. For example, in some dictionaries, the word abdâl is transmitted as the plural ebdel. However, in Arabic it is the plural of bedîl. Bedîl means good, beautiful and distinguished and it means Evliyâullah cemââ’ti. In addition, it is a Turkmen tribe in Anatolia. Some words have been confused such as إبداع and إبضاع.

B) AVAILABLE OTTOMAN LEGAL DICTIOANRIES IS NOT SUFFICIENT IN THE SOCIETIES. What comes into mind is the magnificent collection of Umar Nasuhi Bilmen’s eight volumes of Hukuk-ı Islamiye and Istılâhât-i Fıkhiyye Qamusu; the Islamic Law dictioanry of Elmalili Muhammad Yazir; the fiqh items in the Encyclopedia of Islam by D‎‎iyanet have included as a result of great research, and the old and new monumental Arabic books (Muhammad Lügat’il of Muhamed Keeper of Muhamed Keeper, by his work Kehshafuu Istılâhât’il-Fünûn of Tehânevî his work called Fukahâ.). The only missing thing is that some legal and historical terms seen in the Legal Codes are not included. As we have already mentioned before, the works relating to the Islamic Law, without examining the Ottoman practice, are not of sound judgment; but are inadequate.

In my work called The Dictionary of Ottoman Historical and Legal Terms, the sources have been summarized and one by one accounted for.

LANGUAGES AND LITERATURE REGARDING THE TECHNICAL TERMS: This is a matter I must confess that I still have problems with. Unfortunately, we are not sure what the origin of some of these words are. In this respect, I will be very happy to receive the revisions and explanations of historians and lawyers who will grant to us in the future.

LOCATION AND PERSONAL NAMES: In this work I have not included personal names, I could not place the names of places and persons related the Ottoman History. Because there are not many resources at hand. This work does not include Sufi Islamic societies as long as it does not concern Ottoman History and Law. The same is true for Ottoman literature, logic science, Hadith sciences, Tafsir sciences, and similar sciences. However, this book has been taken from relevant sources related to the sciences such as Sarf, Nahiv, Belâğat, Logic, Münâzara, Cedel, Hadith, Tafsir and so on which are included in the content of the Usul-ı Fiqh.

CAN EVERYONE BENEFIT FROM THIS QAMUS? It is important to note that there are different classes that will benefit from this work:

All Islamic lawyers, those who read fiqh books; lawyers; theologians, and madrasa students will find 90% of the Islamic vocabulary they seek.

All historians will find in this work related subjects of the majority of Ottoman and even Islamic historians.

These two groups, if they know Turkish, will search for them in alphabetical order. However, it would be sufficient for all the researchers, who do not speak Turkish, to have only Ottoman, Persian, and Arabic originals of Persian in their hands. Because we will put it at the end of the book, we will easily see at what pages the texts are quoted, aligned with the Arabic alphabet.

This work will be useful for people who are interested in Islamic Law and Ottoman History at all levels, and especially for the transfer of knowledge to students. 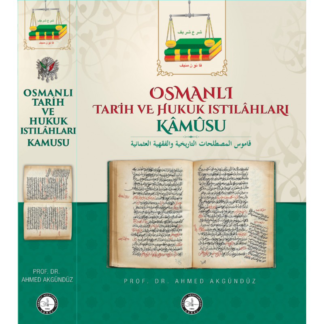 You're viewing: The Dictionary of Ottoman Historical and Legal Terms €45.00
Add to cart