Ottoman Laws and Its Legal Analyses 1 in Arabic

The story of this book (Ottoman Laws and Its Legal Analyses) started in 1969 when the author Prof. Dr. Ahmed Akgunduz read fiqh and Kanunname from the widely spread and distorted Islamic Encyclopaedia (Turkish Version of Islamic Encyclopaedia by Brill) of that time. The author was just a 4th grade primary school student, but promised to write a book about Ottoman Law. The first attempts to write this book started at the time of the former Prime Minister of Turkey Turgut Ozal. In writing this book, the author has faced many difficulties and obstacles, but eventually, the book has been written after a lot of research by the author in the Ottoman Archive in Ankara and Istanbul, Turkey. 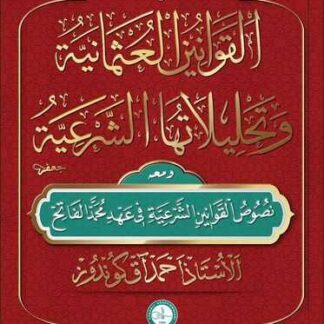 You're viewing: Ottoman Laws and Its Legal Analyses 1 in Arabic €30.00
Add to cart