We should keep in mind here that only sovereign Muslim states/governments have the legal authority to implement Islamic law. An individual Muslim has no legal authority or power to implement Islamic law. The law of Islam certainly does not say that every Muslim is obliged to implement Islamic law. It matters not how efficient and popular that individual may be as a brave warrior or a meticulous planner of unlawful and immoral schemes of hatred, terror and destruction. Only people who are properly qualified and trained, and hold a license from Muslim governmental authorities, have the authority to issue fatwâs. Not every Muslim individual qualifies as a Muftî (a jurist-consult or scholar of law who has been given a license to issue fatwâs.). For this reason Bediuzzaman says: “And we know that the fundamental aims of the Qur’an and its essential elements are fourfold: divine unity (al-tawhîd), prophethood (al-nubuwwah), the resurrection of the dead (al-hashr), and justice (al-ʿadalah). Al-Adâlah means law. He adds in another treatise: “Let our ulul-amr (satesmen and political authorities) think over implementing these rules”.

This book is divided into eight chapters.

Chapter I.Because of the many misunderstandings that arise, some terms related to Islamic Law, such as Sharî‛ah, fiqh, qânûn, ‘urf, Islamic Law, and Muhammadan Law are explained.

Chapter II.Here, in this chapter dedicated to references on Islamic Law, the real added value of this book is found.

Chapter IV. We will provide detailed information here on the different law schools and theological divisions.

Chapter VII. We will explain the system and methodology of Islamic Law in this chapter.

Chapter VIII. We will give some brief information here on the implementation of Islamic Law, its future; some encyclopedical works on Islamic law, and new institutions of Islamic fiqh.” 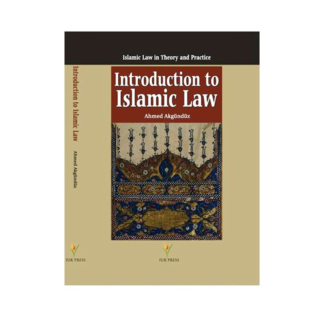 You're viewing: Introduction to Islamic Law €30.00
Add to cart